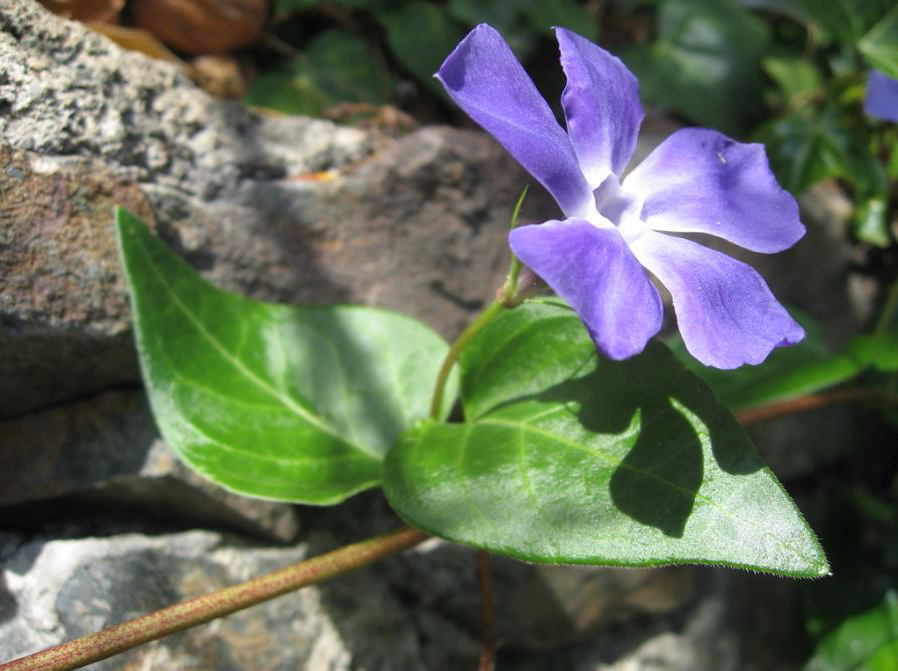 Periwinkle (Vinca major) was first observed in Watson Woods Riparian Preserve in 2016. Since that time, Prescott Creeks has engaged volunteers in a multiple methods to control, and ideally locally eradicate the periwinkle from the Preserve. A recent effort is being viewed as a preliminary success.

While the plant may be viewed a desirable landscape plant around homes and businesses, it can cause serious ecological issues once established in wild habitats like Watson Woods. Periwinkle forms a dense cover that prevents growth and establishment of other plant species (Stern 1973). Periwinkle lowers species diversity and disrupts native plant communities. Riparian zones are particularly sensitive. Major infestations at The Nature Conservancy’s Ramsey Canyon Preserve in southern Arizona have suppressed natural erosional processes in a creek, promoting deepening and scouring of the creek bed and altering local hydrology and vegetation (McKnight 1993). Originally from southern Europe and northern Africa, periwinkle was introduced to the United States as an ornamental groundcover and medicinal herb (Schittler 1973). It spreads vegetatively and is not known to reproduce sexually in California (Bean and Russo 1986). Water can transport broken stem fragments throughout riparian zones, where the plant’s ability to resprout enables it to spread rapidly. The rate of spread is not documented in the literature, but it appears to be limited
by shade and moisture requirements (both elements abundant within the Preserve).

While chemical control has shown effective at Ramsey Canyon, Arizona, Prescott Creeks has used a manual/mechanical control approach. Hand digging was productive, but laborious, so Prescott Creeks experimented with installation of black plastic sheeting over the infested area. After approximately 11 months, all covered areas show no live Vinca major. treatment area margins were manually treated and a native grass seed mix incorporated into the soil. The area will be monitored over the next twelve months to determine overall success of the project.

Periwinkle is a spreading perennial vine with glabrous, dark green stems that contain a milky latex. The non-flowering stems grow close to the ground, rooting at the nodes and extending outward to three feet. Flowering stems grow erect to knee-high with solitary flowers developing in the leaf axil (Bean and Russo 1986). The purplish-blue flowers have five equal petals fused at the base. Five stamens attach near the top of the corolla tube, which is hairy within.

**If you see periwinkle in a local riparian or local lake, please contact Prescott Creeks with detailed location information and pictures showing the size of the population.**