The Prescott Creeks Preservation Association was founded as a 501(c)(3) on March 8, 1990 through the efforts of Bette Bridgewater, Betty Siegfried, and Jay Eby. The founding group coordinated with the Keep Prescott Beautiful Committee on the annual Granite Creek Cleanup and in 1992, coordinated the construction of a nature trail along Granite Creek. The Granite Creek Trail is now part of Prescott’s Greenways Trail System, a 1.5-mile network of trails that provides an alternative travel route and immersive nature-experience in the heart of Prescott.

From 1997 to 1998, with funding secured through grants from the Arizona Water Protection Fund Commission, the US Fish and Wildlife Partners for Wildlife Program, and the Arizona Department of Game and Fish Heritage Fund, Prescott Creeks laid the foundation for the Watson Woods Restoration Project. During this period, the first version of the Watson Woods Comprehensive Plan was developed, a vegetation inventory of Watson Woods was conducted, and much of the basic infrastructure for the Preserve was installed including signs, a fence, an educational kiosk, and eight groundwater monitoring wells.

In 1999, Prescott Creeks made contributions to two important community education projects. In collaboration with the 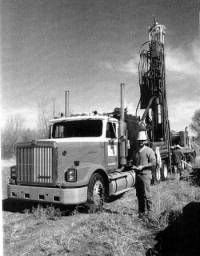 City of Prescott and the Yavapai County Community Foundation, creek identification signs we re-installed throughout the city to mark the creeks where they intersect with roads. Prescott Creeks also met with students from Prescott’s Mile High Middle School to teach them about Prescott’s creeks as part of the giant mural they were creating at the Gurley Street Bridge, better known as the Granite Creek Mural Project.

From 2000 to 2002, in conjunction with the City of Prescott, Prescott Creeks coordinated the design and implementation of mitigation efforts to compensate for environmental impacts associated with the construction of the Parkway Bridge that crosses the Watson Woods Riparian Preserve. In 2001, Prescott Creeks developed and installed 6 interpretive signs throughout the City of Prescott with funding from the Yavapai County Community Foundation. Also in 2002, Prescott’s first watershed monitoring effort was initiated through a partnership between Prescott Creeks, the Open Space Alliance of Central Yavapai County, and the City of Prescott Trails and Open Space Division.
In 2003, Prescott Creeks was busy with planning, grant-writing, and moving operations to The Grove location. These efforts were rewarded in 2004 with a grant from Arizona Water Protection Fund for the development of a master plan for the restoration of Watson Woods. Also in 2004, the Creek Observation Guide was published with funding from River Network.

2004 saw two important designations for parts of the upper Granite Creek Watershed. That year, the nearly 2000-acre Watson and Willow Lakes Ecosystem (including Watson Woods) was designated as an Important Bird Area by the National Audubon Society for the large numbers of seasonal waterfowl and shorebirds that make use of the area. Additionally, the Arizona Department of Environmental Quality added Watson Lake and 13 miles of upper Granite Creek to the Environmental Protection Agency Impaired Waters List in accordance with Section 303(d) of the Clean Water Act.

Also in 2007, with funding from the Arizona Department of Environmental Quality, Prescott Creeks coordinated the 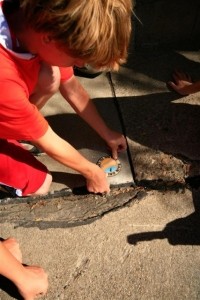 installation of storm drain markers throughout the City of Prescott to raise awareness about the ecological impacts of dumping pollutants into city storm drains. 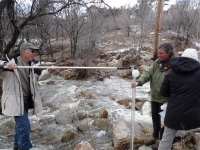 In 2010, Prescott Creeks completed construction of the Rambling River educational stream table as well as a new website. Restoration activities at Watson Woods and Watershed Monitoring efforts continued throughout the year.

2013 featured the securing of funding to begin implementation of the Watershed Improvement Plan. The Prescott Creeks In-Lieu Fee Mitigation Program at Watson Woods Riparian Preserve was brought into full compliance with the US Army Corps of Engineers “New Rule” as it relates to compensatory mitigation and Prescott Creeks began selling mitigation credits to permittees. Late in the year, Prescott Creeks also moved its offices from West Gurley Street, close to downtown, to one of the log cabins on the old Air-Lock Log, Co. property adjacent to Watson Woods Riparian Preserve.

2014 was a flurry of activity with water quality improvement projects in coordination with the City of Prescott at the Whipple St. Basin (just south of Yavapai Regional Medical Center, next to the Taco Bell restaurant) and at the Rowle P. Simmons Community Center on Rosser Street. On-the-ground work at Watson Woods Riparian Preserve included trails coordination with the Prescott Circle Trail, a Wetland Delineation study, and a heavy focus on removal of non-native plant species (weeds!). Additional restoration plans were underway and implementation is expected sometime in 2015. Drafts of “Pollution Reduction Reports” (TMDLs) for Watson Lake and Granite Creek were released by the Arizona Department of Environmental Quality, approximately ten years after their initial listing as Impaired Waterbodies. Late in the year, the Prescott Creeks Board of Directors established the Prescott Creeks Endowment Fund (held by the Arizona Community Foundation – Yavapai County office). Significant donations from several generous donors made this endowment fund possible and will help to ensure that Prescott Creeks has the necessary resources to fulfill its mission into the future.

In late 2014, Prescott relocated its base of operations to a log cabin constructed in 1959 located next to Watson Woods Riparian Preserve at the corner of Rosser Street and N. State Route 89. Updates to the rented building were made and exploration of acquisition of the ~8.5 acres upon which it sat were conducted by the Board, Staff, and other interested parties.

2015 marked 25 years of Creeks Connecting Community for Prescott Creeks. Opportunities to celebrate the 25th anniversary of the organization and to check out the new office were offered to the public and extensive visitation and volunteerism occurred during the year.

2016 and 2017 featured significant fieldwork within the Watson Woods Preserve focused on vegetation management (invasive species control). Additional work for the organization included a joint project with the Yavapai-Prescott Indian Tribe to improve functional characteristics of Slaughterhouse Gulch just upstream from the Watson Woods Preserve. Funding was secured from the Arizona Department of Environmental Quality and planning work begun only to be tabled due to administrative challenges between the grantee and grantor. In 2017, Prescott Creeks also received funding from the Arizona Department of Environmental Quality to construct a public restroom along Miller Creek in coordination with the Coalition for Compassion and Justice and the City of Prescott.

On December 10th and 11th, 2017 the Prescott Creeks office located in the historic log cabin located at 1801 N. State Route 89 was consumed by fire. While incurring a near-total loss, Prescott Creeks stayed operational through the fire, cleanup, and recovery! Of primary concern was securing the Prescott Creeks digital data and the Prescott Fire Department entered the burning building to retrieve the Prescott Creeks data server and backup drives from which a full data recovery was made by The Data Doctors in Phoenix, AZ.

2018 largely consisted of re-establishing securing a physical space from which to work and rebuilding operational capacity with new furniture, computers, and other materials. Fieldwork in the Preserve continued and planning for construction of the Miller Creek Public Restroom progressed.

The beginning of 2019 was largely consumed with construction of the Miller Creek Public Restroom which was opened for use at the end of April. Headway was also made in discussion with the City of Prescott regarding renewal of the Watson Woods Riparian Preserve Lease agreement (set to mature in July of 2020) and establishment of a conservation easement for the Preserve.

Plans for 2020 became dominated with responding to the COVID-19 pandemic. With the first-ever cancelation of Granite Creek Cleanup and near-complete cessation of volunteer fieldwork, Prescott Creeks shifted focus to an online presence through social media, development of a new website, and conversion to a new database system. A Virtual Cleanup effort engaged the community in the spring and work with partners resulted in significant improvements with vegetation management (Arizona Conservation Corps), release of rehabilitated American Kestrels (Prescott Audubon Society and AZ Game and Fish Department), and completion of the Miller Creek Public Restroom project (Coalition for Compassion and Justice, AZ Department of Environmental Quality, and the City of Prescott). A notable milestone was renewal of the Watson Woods Riparian Preserve lease for an additional 25 years (to 2045).

Future
Adapting to the ongoing COVID reality, Prescott Creeks is moving forward with mission-related work in the community. A completed conservation easement for the Watson Woods Riparian Preserve is anticipated mid-2021. Restoration Phase II/Mitigation Work Plans should follow with on-the-ground implementation beginning in the winter of 2021/2022. An appropriately sized office location, ideally on the site of 1801 N. State Route 89, is needed to accommodate a growing Board of Directors and staff.