Photographs are indispensable tools to qualitatively document and assess change in any environment. Simply put, they show change over time in a very relatable form. While photographic monitoring alone is not a complete monitoring program to assess project performance and change, they are an important “tool” we have in our “toolbox” for keeping track of what is happening out on the ground.

Formal photographic monitoring at Watson Woods Riparian Preserve was initiated in 1997 as part of our first vegetation characterization. That study established 26 permanent sampling transects (or lines 40 meters in length) within the Preserve. In addition to the collection of vegetation data at these transects, photographs were taken at the 0.0 meter mark (the beginning) and at the 20.0 meter mark (the halfway point). The transects turn 90 degrees at the 20.0 meter mark, so the photographs for each point show significantly different views.

Other Photographic monitoring points were established in ca. 2005 that feature images from both within the Preserve, along the boundary, and from high points that area around the site. In 2009, additional photo-points were set up specifically to monitor and assess the $1.5 million ecological restoration project which took place from 2009 to 2013. These photo-points are periodically visited to collect current images and assess change.

The photographs below were taken from the Prescott Lakes Parkway bridge looking downstream toward the north and depict Granite Creek at “Reach 4”. The first photograph shows the site immediately after the realigned stream channel was constructed in the spring of 2009. The light bands along the banks for the creek are erosion control cloth to hold soils in place and the floodplain farther away from the creeks appears to be mostly bare soil. In the second photograph was taken in the fall of 2012 at the end of the project monitoring period. In this image, the erosion control cloth is no longer visible due to the planted shrub willows growing in along the banks of the creek. Viewers might also notice on the floodplain cottonwoods (planted in 2010) and native grasses coming in with very little bare soil showing. The last photograph was taken in September of 2022 – marking a decade after the end of formal monitoring for the restoration project. Many viewers of this image quickly comment about the changes to the hilltop at the top left of the photo that is now dominated by houses. But a closer look at the central portion of the photograph shows tremendous change in the vegetation within the Preserve. The path of Granite Creek is difficult to pick out in this image due to the growth of the planted cottonwoods and willows! The cottonwoods closest to the camera are as tall as the Prescott Lakes Parkway Bridge. Native grasses dominate the floodplain, and much of the horizon is beginning to be obscured by the growth of native vegetation. 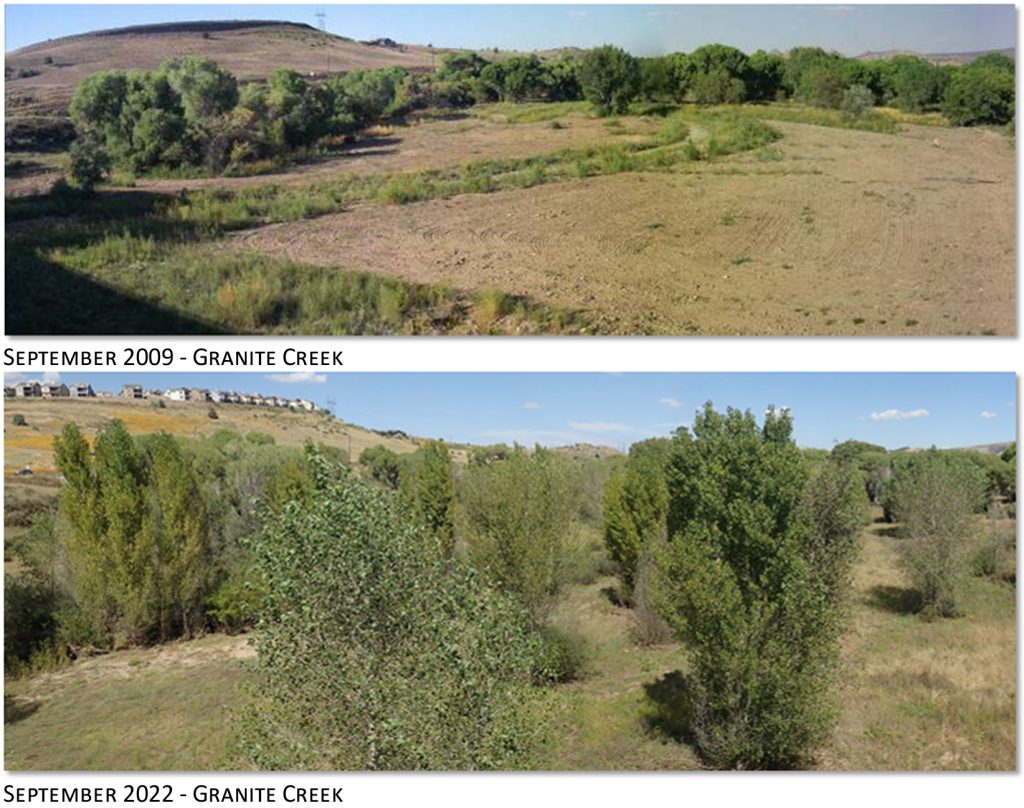 These photographs show changes within the Preserve that all suggest the ecological restoration project is trending in desired directions. A primary goal of the project was to enhance, restore, and recreate riparian vegetation and habitat along the Watson Woods Riparian Preserve reach of Granite Creek. Information from these photographs demonstrate quite simply the increase in riparian habitat associated with the creek. Taken together with field observations of birds, plant diversity, flows and flooding on the floodplain, and combined with statistical data, photos can be an indispensable tool for assessing project performance. 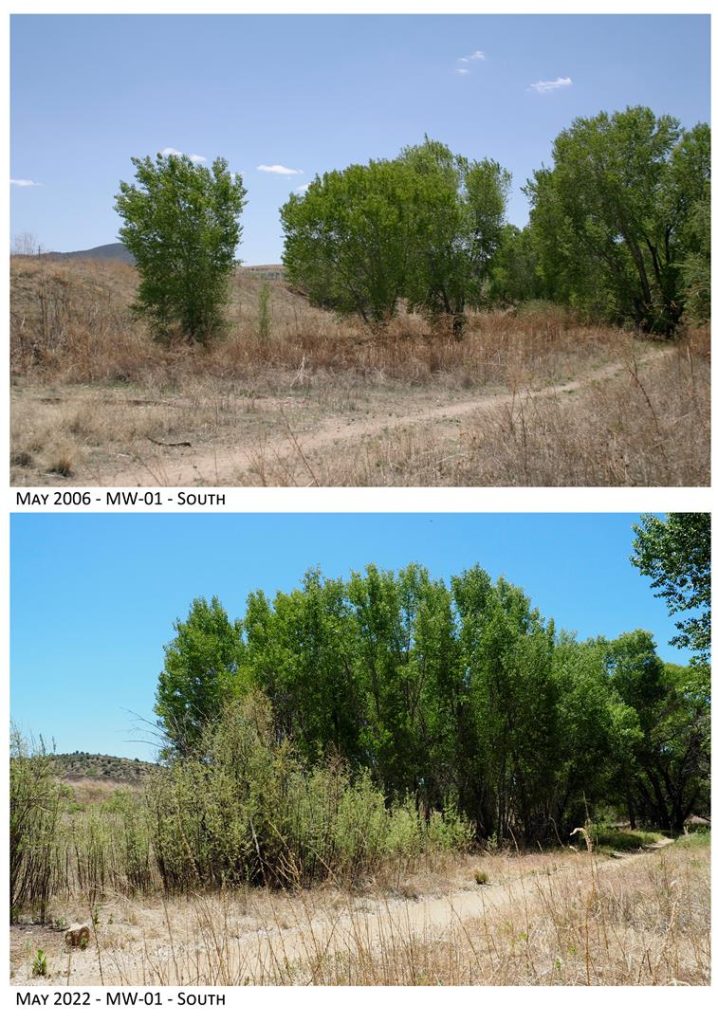 Over 100 photographs were shot in 2022 at over 40 photographic monitoring points in and around Watson Woods Riparian Preserve. As we process these images we’ll publish them here on the Prescott Creeks website.