According to the National Oceanic and Atmospheric Association (NOAA) office in Flagstaff the Monsoon Season in Northern Arizona officially runs from June 15th to September 30th each year. However, we don’t typically begin receiving monsoon moisture until the beginning of July. NOAA also indicates that that much of the Northern Arizona area receives 40-50% of its annual precipitation during the Monsoon Season (1). To date in 2022, Prescott has received almost 84% of its precipitation during the Monsoon.

Anyone who has been around Prescott during the monsoon knows how variable storms and rainfall can be around the area. The variation of between gauges is especially interesting given that they all lie within 0.25 miles of each other. That’s a difference of just over 3” of precipitation between the three gauges – with the Preserve gauge (which is generally located between the other two) coming in with the lowest reading.

Using the official Sundog gauge total of 13.78” sets 2022 as the 5th wettest monsoon on record, while using the unofficial Office total of 14.97” as the 4th wettest. This is good for our watersheds and their riparian areas! 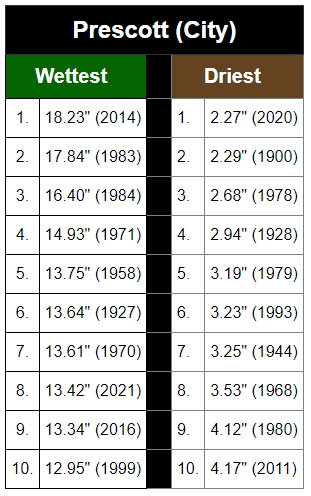 As noted above, Prescott Creeks maintains a rain gauge within the Watson Woods Riparian Preserve. This gauge was originally installed in 2009 during the Restoration project and is read regularly by a Prescott Creeks volunteer. On October 17th, the volunteer reported the gauge as missing. A new gauge has been installed in a new location.

If you encounter this rain gauge (or other equipment in the Preserve), please do not tamper with it. Equipment like the rain gauge provides important information to Prescott Creeks and the City of Prescott to help manage the Preserve, plan restoration projects, and contribute to the overall scientific record for the area. 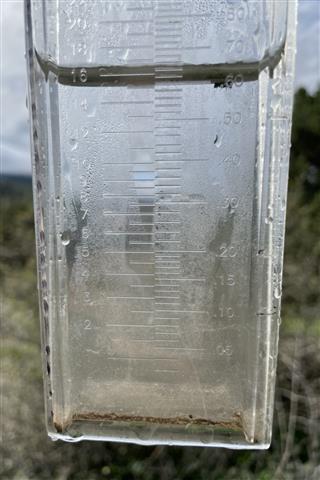