The continued restoration efforts within Watson Woods Riparian Preserve have resulted in tremendous improvements in the riparian and wetland habitat and its associated animal species. Since 2009, over 20,000 trees have been planted, 3,500 ft of Granite Creek has been restored, and over 25 acres of wetlands have been created! Also, with on-going management activities and 13,000 (and counting) volunteer hours recorded, the entire 126-acre Preserve is bouncing back from years of degradation and abuse. It has truly become an “oasis” once again.

Prior to modern-day Prescott, Watson Woods was part of a larger 1,000+ acre riparian gallery forest, and as late as the 1860’s, showed vibrant health and year-round water flows. Beginning in the early 1900’s, however, Watson Woods was directly impacted by logging, mining, and drainage modifications, in addition to surrounding activities such as development, roads, and infrastructure. Both on and off-site activities delivered the “1-2 punch” to Watson Woods, and by the 1960s-1970s, Watson Woods was regarded as a wasteland; true to so many wetland ecosystems throughout the country. By the mid-1990s, Prescott Creeks and the City of Prescott joined forces to protect and restore the area. A 25-year renewable lease authorized Prescott Creeks to begin research and planning for the area. 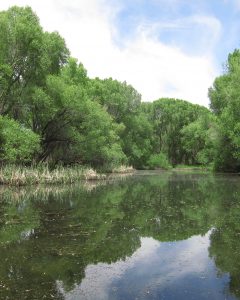 After a decade of planning and pilot project implementation, restoration plans were finalized and funding was secured from the Arizona Water Protection Fund Commission, the Arizona Department of Environmental Quality Water Quality Improvement Grant Program, and the City of Prescott. In 2009, Prescott Creeks implemented the restoration of Watson Woods, which was a five-year project consisting of on-the-ground work followed by extensive monitoring activities. (See the final report here.) The primary component was the realignment of the Granite Creek channel in order to improve its ecological function. Excavators and bulldozers were deployed to create a new creek and install biological revetments for stabilization. In addition, cottonwoods, willows, and native grasses were planted along the banks of the creek, all of which created new wetlands, riparian areas, and wildlife habitat.

Although the initial restoration activities have been completed, ensuring long-term success requires ongoing maintenance, monitoring, and management, including the following:

We are not finished yet!