For the last few years, Prescott Audubon Society (PAS) has worked with Prescott Creeks to install and monitor nest boxes in Watson Woods Riparian Preserve for use by American Kestrels as part of an effort by the American Kestrel Partnership (AKP) and the Arizona Game and Fish Department (AGFD) to understand the declining numbers of these birds throughout the United States. This year AGFD raptor specialist Tuk Jacobson, who bands kestrel nestlings which hatch in the boxes, proposed the idea of releasing rehabilitated kestrels near unused nest boxes. He wondered if allowing the birds a few days to become familiar with a new environment, while protected in a wire-mesh enclosure, might result in their use of the nest box in the spring.

The nest boxes in Watson Woods, two of which were successfully used by kestrels during the first year of the program in 2017, have remained unused since then. One of these boxes was chosen as a suitable release location and a hack box was installed. A few days later Tuk delivered an unrelated male/female kestrel pair (photo #1). Both birds had been found out of their nests before they could fly well enough to survive and were cared for at a wildlife rehabilitation center in Phoenix. Each bird has a large black band on its left leg in addition to a small aluminum band on its right leg.

For ten days, volunteers provided food and water for the kestrels and observed their behavior (photo#2). Meal offerings included dead mice, dead quail pieces, and live grasshoppers. Any grasshoppers which died before being consumed were ignored. We also learned that the kestrels preferred quail to be served in pieces small enough to be carried around in their talons. Game camera photos revealed a couple of surprises. A human visitor was thoughtful enough to keep a respectful distance from the box. A visiting Cooper’s Hawk was not as respectful and attempted, without success, to get to the kestrels.

On the day of the release, we fed the kestrels early so they would have energy for their first flights. We also left mice in the box so they would know where food was available if their initial hunting efforts were unsuccessful. About two hours later the door was opened and the female was the first to leave the box (In photo #3 she looks like an angel as she flies free for the very first time). She perched briefly in a nearby tree and then moved a short distance to another perch. The male left the box, flew several hundred feet, perched in a tree, and began calling. About half an hour later, the female flew, a bit awkwardly at times, in his direction. Both flew out of sight over a hill and were not seen again. 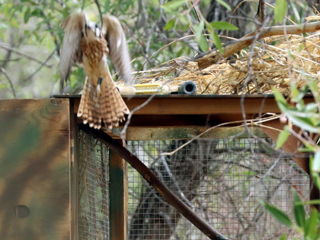 Since the release, there have been no reported sightings of either of these birds. (If you see a banded kestrel, please report the date and location to Prescott Creeks. If the number on the black band is visible, please include that information as well.)  Maybe the kestrels were deterred from returning to the box by the presence of predator hawks and owls. Possibly they were able to find sufficient food on their own. Perhaps they have migrated south for the winter. We wish these newly-independent kestrels success and hope to see them in the spring.

Prescott Audubon thanks Prescott Creeks for its support of the nest box program over the years and now this extension of that program. PAS also thanks the City of Prescott Recreation Service Department and the AGFD for their parts in making this project possible.