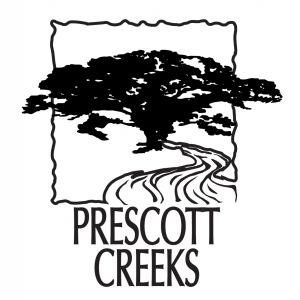 Creeks are for Kids

PRESCOTT – With towering cottonwood trees serving as the walls of the classroom, a picnic table serving as the desk, and Granite Creek as the specimen, a group of local elementary students took on the role of scientist this past week.

The pretty park setting undoubtedly added atmosphere, but it was not the major focus of the excursion for the 15 or so fourth- and fifth-graders from Prescott’s La Tierra Community School.

Their main mission: To test the water in Granite Creek for a variety of factors, including pH levels, dissolved oxygen, and temperature.

La Tierra teacher Peter Dorsey explained that the water-testing trip to Granite Creek Park in downtown Prescott was a part of an ongoing science section.

“(The lesson) is on the scientific process and how to think like a scientist,” Dorsey said, before leading his class on the five-block walk to Granite Creek Park.

As he prepared the students for the expedition, he reminded them of the goals for the trip.

“What are we doing with the water?” he asked the students, leading them through the observation, hypothesis, and testing stages of the process.

“You are the scientists today,” Dorsey told the group.

Even before they left for the park, students had plenty of ideas of what they might find in the water.

“There might be lots of algae,” said one. Or, another guessed, “It might be brown and dirty.”

After they arrived at the park, the students split up into groups, and assigned each member a task.

It was obvious from their enthusiastic participation that the students were thriving on the out-of-the-classroom experience.

“It’s really cool,” said 10-year-old Soleece McKinley. “We’re out, and it includes the science. And we need to have teamwork.”

Added 11-year-old Kayla Champlin: “I like it a lot. I just like doing these experiments and being out.”

The expedition was a joint project of the Arizona Department of Environmental Quality (ADEQ), the local Prescott Creeks organization, and La Tierra, and it obviously met the goals of each.

Sybil Smith, the northwest Arizona community liaison for ADEQ, provided the testing kits for the students and helped to guide them through the process. She noted that the statewide program helped to educate students about water and gave them a hands-on look at water quality.

“We do these all over the state,” Smith said, adding that a grant helps to cover the cost. Because many schools cannot afford to buy all of the needed testing equipment, the state program brings the program to them.

Prescott Creeks Outreach and Communications Director Ann-Marie Benz said the excursion helped with an important aspect of the organization’s mission.

“The big thing is, our creeks are impaired,” Benz said. Noting that the Prescott Creeks organization is working to determine the source of the pollution, Benz said community involvement has been a crucial component.

“Part of that is getting the students invested, so they understand how this is all connected to our world,” Benz said. “We’re starting them young.”

Overall, Benz said, the students’ testing was showing that the water quality in Granite Creek this past week was better than expected.

“In general, it appears to be pretty good – the pH is good, the dissolved oxygen is good,” she said.

“One of the things we’re finding is that the water is freezing cold,” Dakota said as he warmed his hands after taking a sample. “It looks a lot warmer than it is.”

Benz said the program helps to bring an all-around awareness to the students at a young age.

“Part of it is growing them into this, making them more aware than we were at their age,” she said.